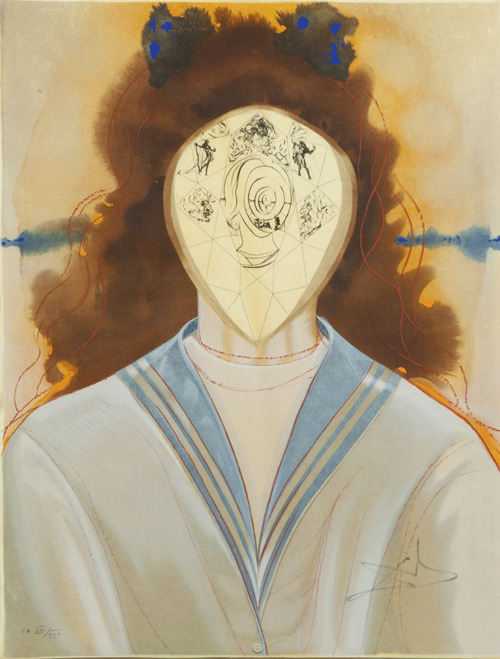 Immortality does not mimic a particular alchemical symbol, but instead represents the effects of the Elixir of Life, or the Philosopher's Stone-the goal of alchemy. The Elixir can transmute all metals into gold, cure all disease, resurrect the dead, and guarantee immortality. This portrait-like image can be interpreted as the representation of a successful alchemist, one who has attained immortality. According to alchemical legend, once the successful alchemist is tranformed by the Elixir/Stone, the unconscious aspect of his psyche will be illuminated by consciousness.

The composition of Immortality is one of the most static in Alchimie des Philosophes. Dalí presents the figure as a conventional chest-length portrait. The figure is angrogynous, wearing unisex clothing and lacking any identifiable features which adds to the anonymity of the print. Instead of a face, the figure has a pear-cut jewel with different forms in each facet. The center facet features another androgynous head, whose face is replaced by a swirling pathway on which travelers (alchemical pilgrims) stand facing a sphinx. In the center of the face/path is a cracking egg. The egg is both an alchemical and dalinian symbol and was certain to appear in some detail of Alchimie des Philosophes. In terms of Dalí's symbolism, the egg represents rebirth and resurrection, which is similar to the alchemical meaning as well. Alchemically, the egg represents rebirth and the creation of the Philosopher's Stone. The other facets of the main figure's face include two classical portraits in profile, one of which has a green gem as an eye. At the top of the face/jewel is an angel. Although the work is static, Dalí conveys eternity and the passage of time through the swirl within the figure's face. 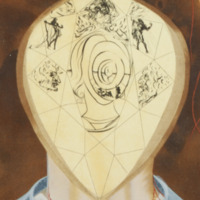 Detail 1: The pear-cut jewel/face, with miscellaneous figures in facets surrounding another head. 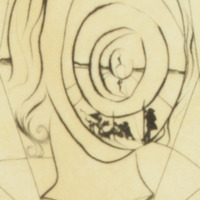 Detail 2: The face within the face, and the pilgrims traveling towards the cracking egg. 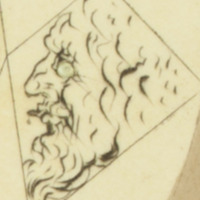 Detail 3: One of two faces in profile facing each other. This one appears more elderly and malicious, sticking out his tongue. His eye is a jewel attached to the print. 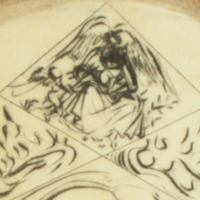 Detail 4: The angel in the top facet of the jewel/face. A smaller cherub stands at its knee. 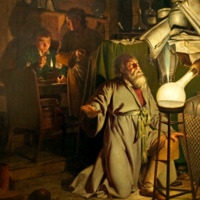 Joseph Wright of Derby, The Alchemist Discovering Phosphorus, 1771. Dalí's Immortality is unique in the history of art because it represents a successful alchemist. Ordinarily, images of alchemists would depict men in their laboratories, looking focused or frustrated. This painting by Joseph Wright is a typical image of an alchemist. However, unlike most, Wright's focuses on a moment of success and wonder instead of failure or stress. In this case, though, the alchemist has discovered Phosphorous by accident during his experiments. This alchemist is not truly "successful" because he did not manufacture the Philosopher's Stone. On the other hand, Dalí's Immortality appears to be absolutely one of a kind, presenting a portrait-like image of the immortal alchemist, after creating the Philosopher's Stone/Elixir of Life. 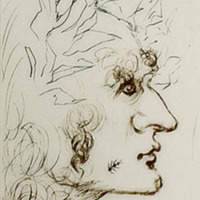 Dalí, Julius Caesar, 1968. This profile is almost identical to the left face in profile which is visible in Detail 1. The face in Immortality, however, is much older. It could be another portrait of Julius Caesar, or simply an "immortalized" Roman figure. The Romans believed that eternity was granted in a person's legacy. 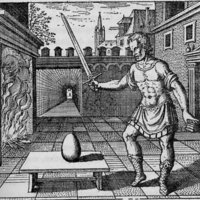 The egg is an important alchemical symbol. It most frequently represents the vessel used for the alchemical process. For some alchemists, the egg also represents the cosmos, because of oval planetary orbits that resemble an egg. The egg is often called the Philosophical or Cosmic Egg, and is considered to belong to the griffin. The sphinx-like figure blocking the travelers (or alchemists) in Detail 2 may instead be a griffin protecting its egg. In this alchemical emblem by Michael Maier, the egg represents the unpurified matter that the alchemist begins with. The emblem instructs the alchemist to strike the egg with a glowing sword, so that it may be purified. 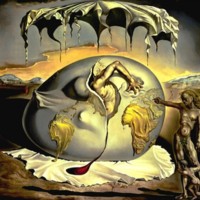 Dalí, Geopoliticus Child Watching the Birth of the New Man, 1943. Dalí himself was obsessed with eggs, and they reappear in his works throughout his long career. He used them as symbols of rebirth and prenatal existence. His theater museum in Figueres, Spain has several enormous eggs on top of the building.

“By consuming these two substances we can refine our bodies such that we neither grow old nor die.” -The Elixir of Immortality

“Though a man whom you deem unworthy may offer you jewels piled mountain-high, do not divulge the Method.” -The Elixir of Immorality

“In studying immortality, it is of the utmost importance to realize that the sexual act is a dangerous event; why wear yourself out, you will cause your vital spirits to weep!” -Concerning the Yin and the Yang