The King and the Queen 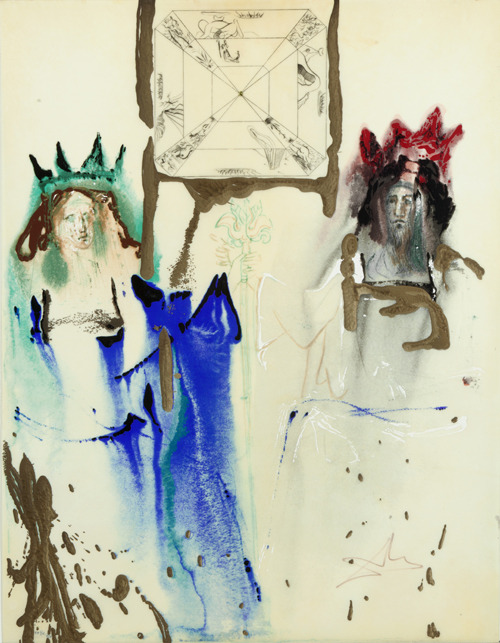 Alchemy is primarily concerned with the joining of opposites-in particular, the substances called Philosophic Mercury and Sulphur, which alchemists considered to be the ultimate opposite principles. Because these two substances were so vital, alchemists represented them with symbols of power and majesty. Sulphur was represented as the King: hot, dry, masculine, and active. Mercury was represented as the Queen: cool, moist, feminine, and passive. Alchemical images frequently portray the King and Queen undergoing the alchemical process. The most important stage of the process is called conjunctio, when the King and Queen engage in sexual intercourse. The result of this intercourse is the combination of the King and Queen into one being containing both of their attributes: the hermaphrodite.

Dalí's King and Queen have not yet undergone the alchemical process and remain distinct individuals. Unlike nearly all of the other figures in Alchimie des Philosophes, The King and Queen have faces, indicating their vast importance in the alchemical process. Their bodies are almost nonexistent, with the highest concentration of color and detail in their faces. Thick drips of liquid gold cover the print and the figures, especially dripping from the faceted jewel at the top of the print. Like the jewels in the other prints, the facets of this jewel contain a variety of figures and symbols. There are several geological structures, including a volcano and some rock formations. The head of a giraffe is in one corner, wearing a crown. A swan-woman, a symbol recurring in some of the other prints, emerges from the mouth of a fish. In the center of the faceted jewel is a physical green gem attached to the print. 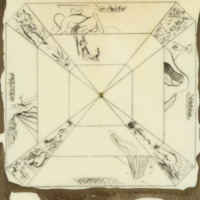 Detail 1: The faceted jewel with a variety of figures and symbols. Many of the figures reference other prints in Alchimie des Philosophes: The woman with a tree for a head, the swan-woman, the Roman face in profile, the crown, and the geological structure with a window cut in the middle. 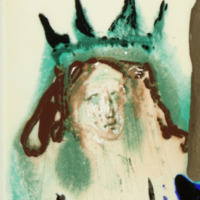 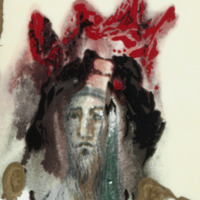 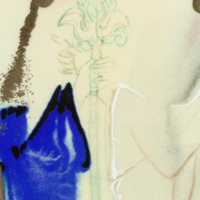 Detail 4: Foreshadowing the joining of the two individuals, the King and Queen grasp a staff together, their hands disappearing into each other. 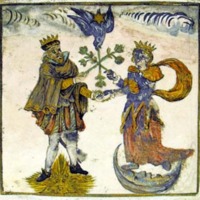 An image of the King and the Queen in the Rosarium Philosophorum from the 18th century. This image is from the beginning of the alchemical process-before the King and Queen have undergone any changes. The staff between them is similar to the one in Detail 4. 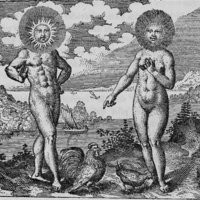 From Michael Maier, Atalanta Fugiens, 1617. The King and Queen are also related to the Sun and the Moon, as they are depicted here. 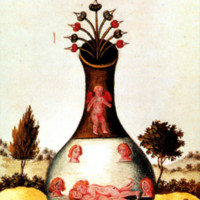 From Donum dei, 17th century. The King and Queen come together during the alchemical process to complete the stage of conjunctio, or sexual intercourse. 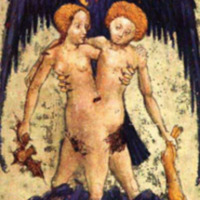 Aurora Consurgens, 14th century. After the King and Queen perform the conjunctio stage, they are transmuted into the hermaphrodite: the perfect being. The alchemical hermaphrodite is the completion of the process, and is also called the Rebis.

“Cause the male to mount the female, that he may beget a child resembling himself, for a father, by his nature is desirous of procreating his kind through the person of his son, so to perpetuate through him the character that he cannot keep to himself; thus must he give of his own substance in order to give birth.” -The King and Queen

“The father is the Sun and the Moon the mother, provided they are reduced to the elementary state, their first matter, or quicksilver, and that it is possible to unite them; for when quicksilver is conjoined with quicksilver no-one can put them asunder, no more than it could be so were it water mixed with water.” -The King and Queen

"So the father begets his son through the female sperm, in such a way that he can impart, as in a breath, his spirit with which we bath him in an undivided tincture, because he is the love and bond between both, and because there issues from the father through the sun, the red Sulphur which can perfect all that is imperfect, that is, into the true Sun. Whence, rest assured that the magistery will result in the stone, through circulations, and as a result of its operations will produce the perfect Elixir." -The King and Queen

← The Emerald Tablet
The Phoenix →
The King and the Queen