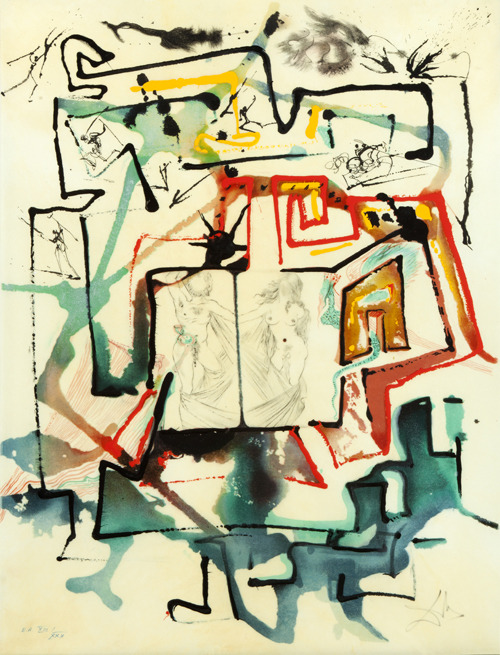 The labyrinth represents the alchemist's dangerous and difficult journey; it is a place of confusion that requires mental stamina and careful decisions. Alchemists referred to their work as a labyrinth, and the image frequently appears in alchemical texts. Alchemists believed that the only way to make it through the labyrinth was with divine inspiration and guidance from God.

Dalí's labyrinth is formed of multi-colored lines, leading to the alchemical hermaphrodite in the center. The hermaphrodite symbolizes the perfect being; it is the anthropomorphized version of the Philosopher's Stone. Because the main components of the alchemical process are represented as the King and Queen, the result of their union and thus the completion of the alchemical process is also human. The hermaphrodite/Philosopher's Stone is in the center of the labyrinth because it is the ultimate reward for an alchemist who can conquer the 'labyrinth' of alchemy. Other figures inhabit the labyrinth, symbolizing obstacles for the alchemist along the way. One figure, the bearded snake with human breasts emerging from a doorway, is particularly mystical and enigmatic. Bearded snakes exist in a number of cultures as symbols of protection and guidance. However, this figure is a serpent with a female upper body, which is interpreted as an allegory of Deceit in the Renaissance. As an embodiment of the serpent in the Garden of Eden, this figure could represent temptation for the alchemist to stray from his task. Further, a figure in Greek mythology has a snake body and female head, Lamia, who is a child-eating monster. Dalí likely combined a number of these traditions to create a creature of his own invention. 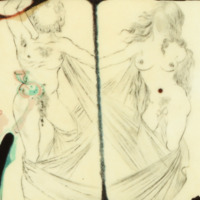 Detail 1: A non-traditional image of the alchemical hermaphrodite, the perfect alchemical being. Instead of a single body with two heads, the hermaphrodite in the center of the labyrinth is a pair of faceless individuals who are attached by the arm. They both have the genitalia of the opposite sex. The female figure has a red jewel attached to her navel. The two are bound together by flowing fabric, yet are divided by a black line. This could be an image of the King and Queen in the process of becoming the hermaphrodite. 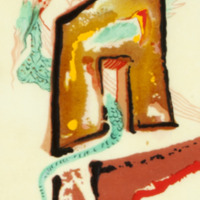 Detail 2: A bearded snake with human breasts, wings, and a crown, emerging from a doorway in the labyrinth. The crown indicates royalty, the beard indicates wisdom. Alchemically, the serpent is a primary symbol; it is the ancient matter which the alchemist purifies. Dalí employs his own mythology, and the creature may be his invention-perhaps a combination of influences mentioned above. 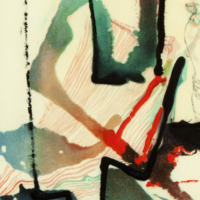 Detail 3: A woman in a medieval dress and flowing cap offering something to the male half of the hermaphrodite. Her offering appears to be a small sack which is almost touching the figure's genitalia. 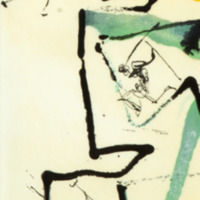 Detail 4: Small, shadowy figures with staffs occupying the labyrinth. They could be interpreted as alchemical pilgrims, but their staffs are more similar to pitchforks than walking sticks. 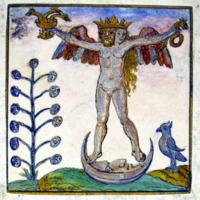 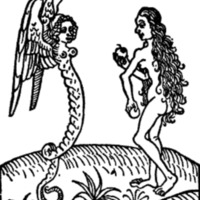 Speculum Humanae Salvationis, 1479. A possible influence for the serpent in Detail 2: the temptation in the Garden of Eden. 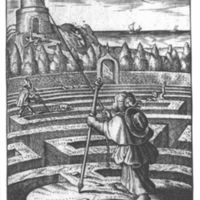 Hermann Hugo, Gottselige Begierde, 1622. The alchemist being guided through the labyrinth by an angel. 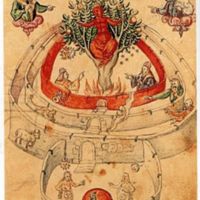 "Should it so happen, oh stranger, that you hear tell of a certain labyrinth fashioned on that which was dreamt up by Solomon, then, that you might construct it out of stones arrayed as the arc of a circle, here is the plan, the form and the structure: its outlines provide but a scanty likeness. Moreover, by heeding the thousands of spirals which unwind outwards, by noting the paths which twist and turn one way and another, then you will come to know the cyclical unfolding of life; you will observe the shifting of the cracks which break up the cyclical coils, you see that it unwinds imperceptibly in a complicated loop, like an evil dragon whose coils unwind as it crawls forward, whether it is being watched or not." -The Labyrinth of Solomon

"There is a side entry through which it is difficult to pass, and the farther in you go, the farther you want to go; and the labyrinth, by means of unexpected branches, leads you further towards the centre, towards a way out which proves to be a dead-end; day after day, with its bends and its bye-ways, it leads you astray, mocking you and your efforts, as if in a dream, with its empty visions; then with the passage of time, comedy-maker, when death prepares to receive you, alas, you will never succeed in escaping from the darkness that it has created.” -The Labyrinth of Solomon

← The Angel of Alchemy
Immortality →
The Labyrinth