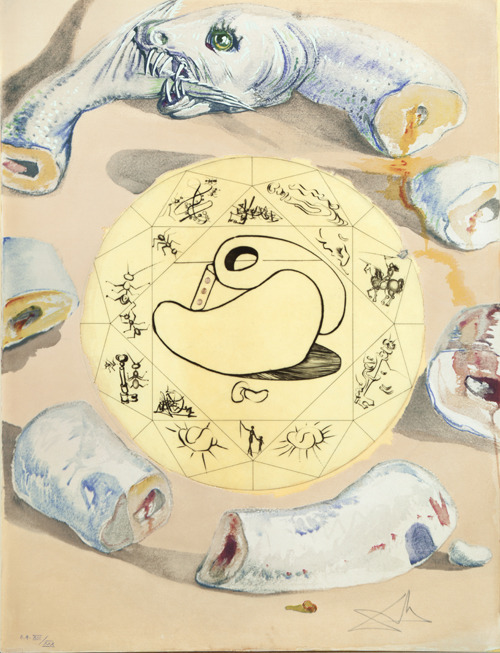 The Ouroboros, the serpent which devours its own tail, is the most ancient symbol of alchemy. It is also called the "paradoxical serpent" and represents the circular process of the alchemist's work. Because the Latin word draco means both "serpent" and "dragon," the Ouroboros is sometimes interpreted as a dragon, as depicted in the gallery below. Outside of alchemy, the symbol was also used to indicate eternity. Dalí, who was obsessed with time and eternity, was likely attracted to the symbol for this secondary meaning also.

Dalí's Ouroboros is more naturalistic than his other prints in Alchimie des Philosophes, and its features are similar to an eel or sea serpent. It is cut in many pieces, though the head biting the tail remains one piece. The Ouroboros maintains its circular shape, though the oozing pieces of the serpent interrupt its sense of eternity. The decaying pieces also represent the alchemical stage of putrefaction, when the alchemical matter decomposes. The pieces are arranged around a large, circular gem. Each facet of the jewel contains a different symbol, including keys and ants. Dalí frequently used ants as symbols of decay and temporality. In this sense, the ants are fitting in their placements around the dead Ouroboros, a symbol of eternity now subjected to the effects of time. The center features an interlocking Yin and Yang. However, the shapes seem intentionally ambiguous, and also resemble slabs of meat similar to the pieces of the serpent. Like the other prints, The Ouroboros is decorated with semiprecious jewels, in this case three purple ones. 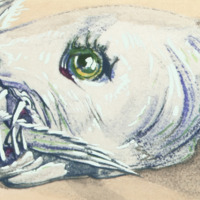 Detail 1: The head of the dead serpent biting its own tail. 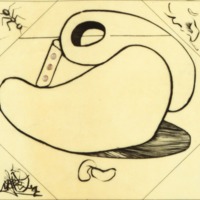 Detail 2: The two ambiguous shapes in the center of the Ouroboros, representing the Yin and Yang. The three purple jewels are attached inside a cylinder arranged with the two shapes. 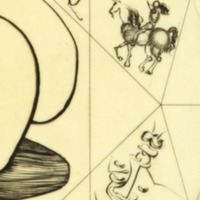 Detail 3: One of Dalí's closed-eye motifs, a figure riding a unicorn (symbol of purity), and an abstracted version of the key that appears in Detail 4. 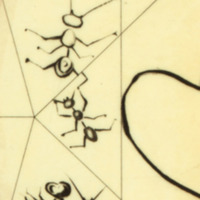 Detail 4: A key and several ants of varying sizes. 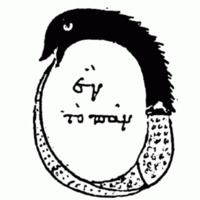 An early illustration of the Ouroboros symbol, from the Greek text Chrysopeoeia of Cleopatra, c. 3rd century A.D. 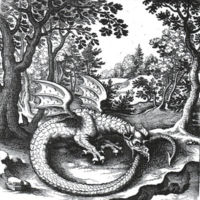 An engraving of the Ouroboros by Lucas Jennis, in De Lapide Philosophico, 1625. There was no standard image of the Ouroboros-sometimes it appeared as a snake, and in this case a dragon. However, it frequently had wings. 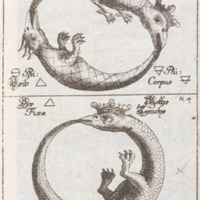 This serpent/dragon is crowned because in Coptic Ouro means king. From Abraham Eleazar, Donum Dei, 1735. 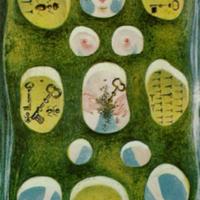 Salvador Dalí, Combinations, 1931. Dalí used the symbols of ants and keys in his other works, including this one. Dalí considered ants to be indicators of decomposition and ephemerality.

"Herein lies the mystery: the serpent that bites its tail, that is, the compound which devours itself and melts into itself, is broken down and changed by putrefaction. Firstly, it becomes dark green; then it takes on a golden colour; next, it becomes red, like cinnabar, as is said, and thus is it the cinnabar of the Philosophers.” -Le Serpent Ouroboros

"Note carefully on which side is the entry of the temple and taking your sword in hand, go in search of it; for narrow is the place where the temple opens, and a serpent lies before it, guarding the temple. Seize him and sacrifice him; then skin him, and, taking his flesh and bones at the entry of the temple, make of them a stepping-stone, mount thereon and enter, and you will find therein what you seek." -Les Visions de Zosime

← The Yin and the Yang
The Philosopher's Crucible →
The Ouroboros