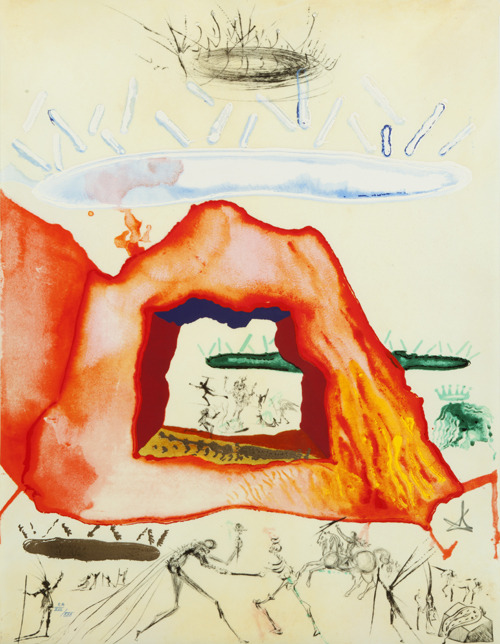 In alchemy, the crucible is a melting-pot for metals involved in the purification process. It also refers to the vessel below the furnace that catches the molten metal. The most essential characteristic of the crucible is its ability to withstand great heat; it is the most important instrument in the alchemical process. Sometimes, the crucible was depicted with a small person inside, called a homunculus. This tiny person symbolizes the finished philosopher's stone-the goal of alchemy. Interpreting the large red mass in The Philosopher's Crucible as the crucible, the figures within the central window could be considered as a representation of a homunculus.

Stylistically, the form of the crucible is typical of Dalí. It is rendered as an amorphous geological formation in a space with no distinguishing landscape or background. The lack of a unifying space suggests each element of the piece exists independently, suspending them in space and time: infinity. The window in the center of the crucible is a recurrent element in Alchimie des Philosophes, and exposes several fantastical creatures, including the alchemical hermaphrodite. The traditional hermaphrodite appears as a one-bodied, two-headed being with male and female genitalia. In alchemy, the hermaphrodite is representative of a perfect being: the two opposing principles combined together after the alchemical process. The background of the print is filled with crowns, which hold some significance as symbols of the Philosopher's Stone and also the status of alchemy as "the royal art." Royalty is a significant alchemical theme. For instance, the two primary components of alchemy are called the King and Queen, and crowns were used as a symbol of the completed, perfect Philosopher's Stone. The figures frolicking in the foreground are as imaginative as the ones in the crucible's window, and include a skeleton, caped demon, unicorn, and one of Dalí's famous melting clocks. 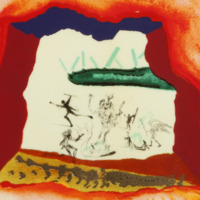 Detail 1: The window in the crucible exposing a variety of fantastical creatures, including the alchemical hermaphrodite. The hermaphrodite is a vital alchemical symbol, representing the two opposites joined in one perfect form. 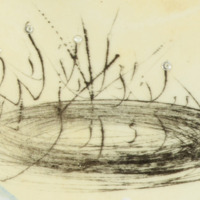 Detail 2: One of Dali's trademark crowns. The tips of this crown are embellished with clear gems attached to the print. 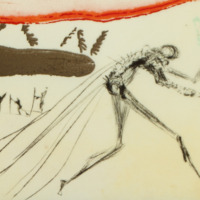 Detail 3: A demon with a ridged back and cape, bowing to a skeleton. 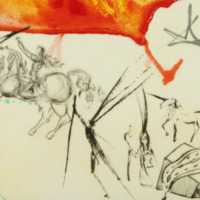 Detail 4: A cavalier, unicorn, melting clock, and two figures with tall headpieces and staffs. Some of the figures recall dalinian iconography like the melting clock, while others represent alchemical concepts. For instance, the unicorn is a symbol of purity, which is what the alchemists sought. 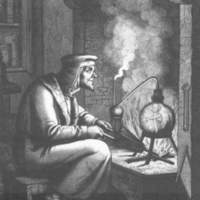 In this 19th century engraving, an alchemist watches as a homunculus forms inside the crucible. 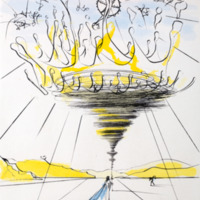 The repetitive droplet-crowns in The Philosopher's Crucible are common in Dalí's works, and the crown is the primary subject in this print, Légitimité (1971). The crown became part of Dalí's signature for some time, acting as a logo of sorts. This signature is present on the back of the Alchimie des Philosophes portfolio (visible in Detail 2 of the Portfolio page). 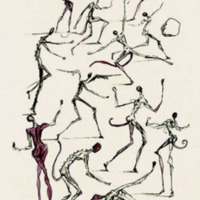 Dalí, Les Demons, 1967. The mischievous demons in this print are reminiscent of the figures in The Philosopher's Crucible. 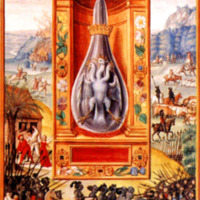 ← The Ouroboros
The Angel of Alchemy →
The Philosopher's Crucible