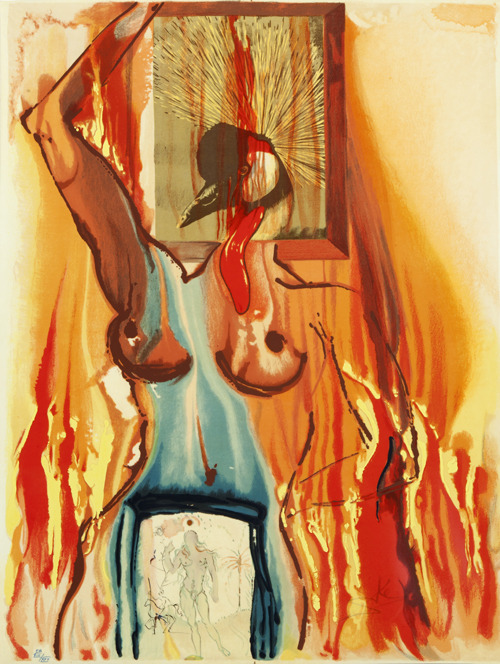 The Phoenix has been a recurring symbol since classical authors like Ovid, Herodotus, and Pliny the Elder wrote of it. According to legend, there was only ever one Phoenix, who lived five hundred years before building itself a funeral pyre and burning itself to ashes. From the ashes, the Phoenix would always resurrect. Christians adopted the Phoenix as a metaphor for Christ's resurrection, and it was an especially important symbol for the alchemists.

The Philosopher's Stone itself, the goal of alchemy, is sometimes described as a Phoenix because the Stone is notoriously deep red and also undergoes a transmutation through fire. Renewal and resurrection are two fundamental concepts in alchemy, making the Phoenix's importance clear. Some alchemical images use different birds to represent the four main stages of the alchemical process, with the Phoenix representing the final stage: the resurrection of the stone.

Dalí represents the Phoenix as a headless female human, whose nude body is engulfed in flames. At the woman's neck, a window/opening reveals another plane with the head of an exotic bird. The bird's head aligns with the woman's body, creating one figure. At the bottom of the print, covering the woman's groin, is another window revealing a scene. A faceless nude male stands contrapposto and points to the sky like a philosopher. An orange semiprecious jewel is afixed to the print above his head, seemingly hovering over the man. Behind him is a hilly landscape with a palm tree and a figure riding a unicorn. The figure has a long-stemmed rose sprouting from its head. Considering the nudity and the pose of the central man in the window, he is likely a representation of the Philosophical Adam, or Alchemical Adam. In alchemy, Adam is considered the first alchemist and the original philosopher. According to legend, the secrets of the Philosopher's Stone were revealed to Adam by God in the Garden of Eden, and after his expulsion he spread the knowledge to a select few. Some alchemists claimed that there was an alchemical treatise written by Adam himself. 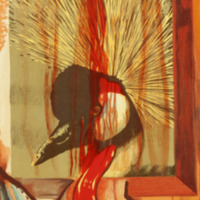 Detail 1: For the head of the Phoenix, Dalí used the African black-crowned crane (Balearica pavonina). 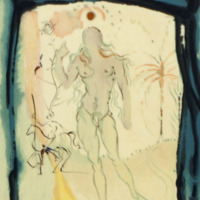 Detail 2: The faceless philosopher/alchemical Adam, with a jewel suspended above his head. 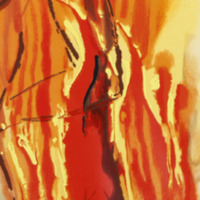 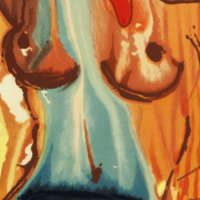 Detail 4: The torso of the Phoenix, the only instance of cool tones in the print. The use of blue is significant because it represents spiritual liberation and freedom from the constraints of a physical body. 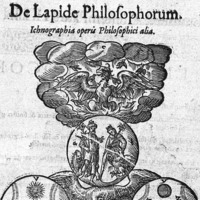 Detail of an alchemical phoenix from Andreas Libavius' Alychimia, 1506. 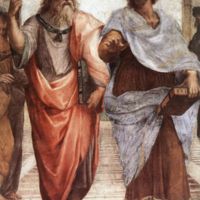 Raphael, detail from The School of Athens, 1509. Like the figure at the bottom of The Phoenix (Detail 2), Plato points upwards while standing contrapposto. His gesture indicates his beliefs that reality lies in Ideas, beyond human experience on Earth. Alchemically, this gesture upwards can also indicate the macrocosm-a fundamental concept. Because the figure in The Phoenix can be interpreted as the Philosophical Adam, it is possible that Dalí was quoting the figure of Plato in The School of Athens. 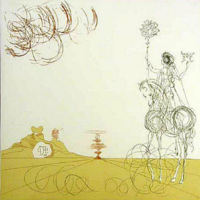 Dalí, Tourbillon-spirale, 1968. The equestrian figure in this work is similar to the figure to the left of Detail 2. However, the figure in The Phoenix has a rose sprouting from its head instead of offering one in its hand. 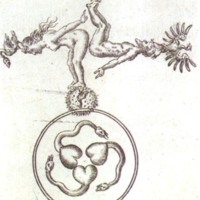 In this complex emblem, the four different birds represent each of the four elements, which are vital to the alchemical process. The phoenix represents fire, and is perched on the man's head to the far right of the image. These four types of birds are frequently depicted together in alchemical art, representing both the elements and the four primary stages of alchemy. The other three are the peacock, swan, and crow. From D. Stolcenberg, Viridarium chymicum, 1624.

"For there is always but a single Phoenix and it lives before it dies, five hundred years; on its dying day it builds a fire, mighty and full of spices whereon it sits and there is burnt; thus it destroys its body completely; but that its form may continue to exist, from its ashes, though it was burnt, another Phoenix is reborn, but is it is the same which reappears, which Nature brought alive again; so valuable is it to the species, that everywhere it would lose its being had it not caused its rebirth; even should Death devour the Phoenix, it remains for ever alive; had death consumed of them a thousand, yet would a Phoenix remain. The Phoenix is a general type that Nature forms again in creatures; Completely lost it would be did it leave no other being. This very mode of being contains all those things which exist beneath the circle of the moon, for were there to remain but one, the species within it will live and death will ne’er overtake it. But Nature, gentle and woeful on seeing that Death the envious, penetrates it with Corruption, that they are intent upon the destruction of all they find within the forge, Always wrought, always forged, Ever are the creatures created afresh by new generation." -Le Roman de la Rose

← The King and the Queen
The Tree of Life →
The Phoenix