The Yin and the Yang 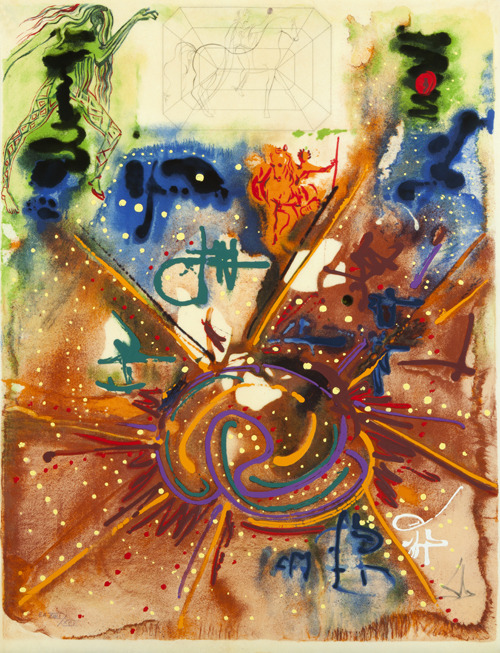 Chinese alchemical beliefs are tied closely with the philosophy and religion of Taoism. Although there are many Chinese alchemical texts, few have been studied. However, the fundamental beliefs of Chinese alchemy are so similar to Western alchemy that some scholars believe they may have shared a common origin. One of these shared ideas is the concept of two opposite principles. In Chinese alchemy, these manifest as the Yin and Yang. Like Philosophic Mercury, Yin is feminine, negative, and passive. Yang, then, is like Philosophic Sulphur: masculine, positive, and active.

Dalí's rendering of the Yin and Yang is vibrant with explosive color and chaotic shapes, illustrating the birth of the cosmos. The Yin and Yang take up the bottom half of the print, interlocked and radiating energetic lines. At the top of the print is a faceted jewel similar to other prints in Alchimie des Philosophes. Inside the jewel is an equestrian figure in profile, raising a purple jewel (physically attached to the print) above his head. Below this is another equestrian figure at a three-quarter view. This figure is orange and red, rendered in bold brushstrokes instead of the thin lines used for the other equestrian figure. Dalí was particularly interested in figures on horseback, which is especially evident in his prints from the 1970's. During this decade, when Alchimie des Philosophes was created, his interest in horses shifted from cavaliers, or knights fighting on horseback, to triumphant equestrians resembling Roman emperors. As is the case with The Yin and Yang, many of his figures on horseback wear laurel crowns and classical clothing. 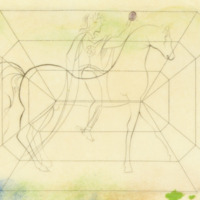 Detail 1: An equestrian figure inside one of Dalí's faceted jewels, a recurring motif in Alchimie des Philosophes. The figure presents a purple gem, which is attached to the print. 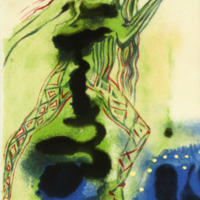 Detail 2: A faceless running woman with patterned legs and a single shoe. 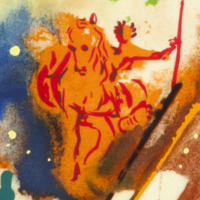 Detail 3: Another equestrian figure, possibly a different view of the figure at the top of the print. He is faceless, like most of Dalí's figures in Alchimie des Philosophes, but the horse has facial features. 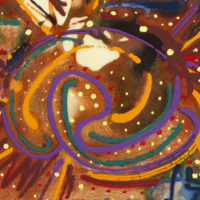 Detail 4: The Yin and Yang, radiating with color, light, and energy. 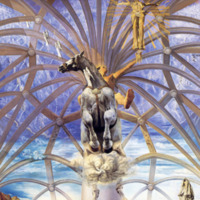 Dalí, Santiago El Grande, 1957. This image particularly exudes the majesty and triumph associated with equestrian figures and serves as an example of Dalí's preference for the motif. 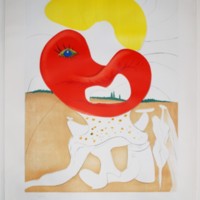 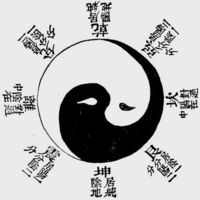 Hu Wei (1633-1714), Yitu mingbian. A diagram of the Chinese Yin and Yang with eight trigrams representing its cycles. 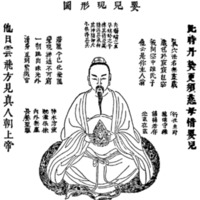 An image of a practitioner of Neidan, or internal alchemy. Neidan focuses on the purification of the soul and the creation of an immortal spirit. Its concepts are similar to Western spiritual alchemy. In fact, much of Chinese alchemy overlaps with tenets of Western alchemy.

“And the Chiu-hsiao chun (Lord of the Nine Heavens) says: the Water of the South, the Fire of the North; the Yin which dwells in the Yang, the Yang which dwells in the Yin; in their going and their coming they are steadfast, in their rising and their setting they are as husband and wife, one in thought and heart; towards the end of their years, their life-blood all but spent, they share together their pillows and bedcloths." -Che Ling Cha Louen

“In its enormity and its omnipresence the Tao encompasses heaven and earth, it governs the movements of the Yin and the Yang, and is responsible for the perfection of the Universe in space and time. In its roundness the sky is Yang and faces left; earth, through its density, is Yin and faces right. The Sun is of the nature of Yang and follows a daily course; the Moon is under the influence of Yin and pursues a nightly course. Sun and Moon cause their brilliance to descend into the womb in which is engendered man.” -Concerning the Yin and the Yang

← The Tree of Life
The Ouroboros →
The Yin and the Yang